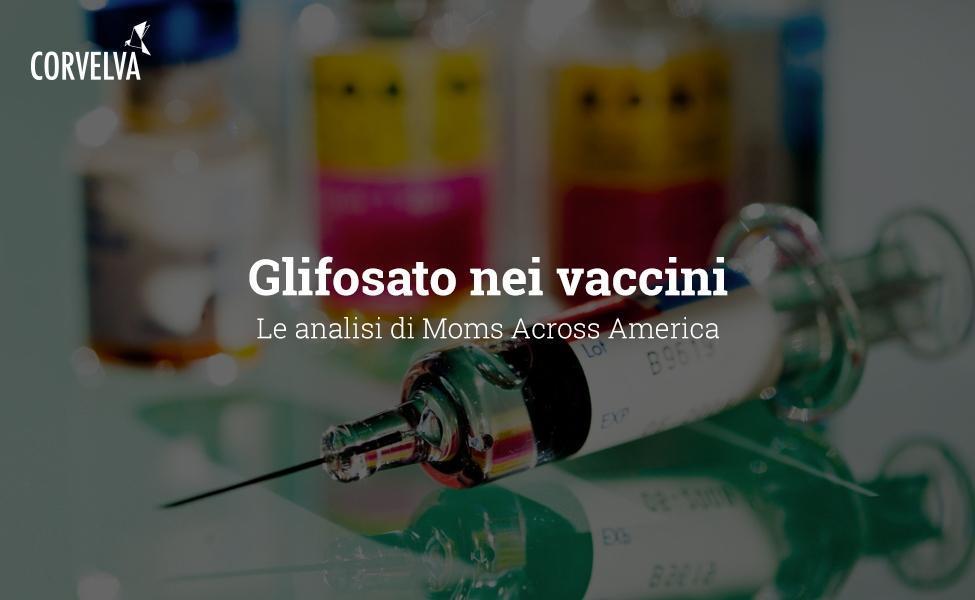 American moms and scientists request tests on vaccines from the FDA and CDC for glyphosate.

American moms and scientists request tests on vaccines from the FDA and CDC for glyphosate.

In September 2016 the American association Moms Across America receives preliminary data from the analyzes performed by Microbes Inotech Laboratories Inc. on some vials of vaccine.
The vials analyzed were multiple and the results were alarming: 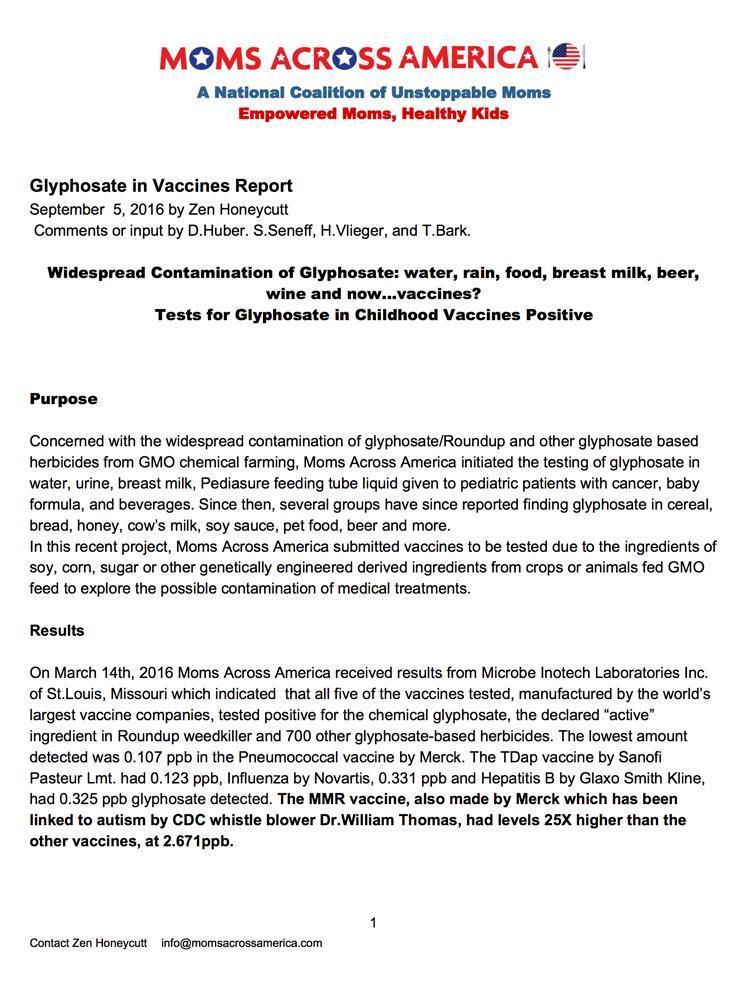 Moms Across America sent a letter on September 1, 2016 to the FDA, the CDC, the EPA, the NIH, the California Department of Health and Senator Boxer, asking to have the vaccines tested to verify and confirm the dangerous contamination from glyphosate "And in the meantime, we are asking our legislators to rescind the mandate that forces parents to vaccinate their child in order to attend school, in light of new extraordinary evidence.".

Honeycutt, president of Moms across america, he says, "We were shocked to find the presence of glyphosate in all five vaccines and find that glyphosate contamination has extended to our medical treatments. The thing is, the CDC, vaccine manufacturers and our regulatory agencies were supposed to test herbicide / pesticide contamination 40 years ago before they started using these chemicals on our food and feed.

The tests were conducted with the Elisa method which is considered by the scientific community only as a screening method and not as accurate as HPLC mass spectrometry. Throughout 2016, Moms Across America tried to request numerous laboratories to test further vaccines and finally dAfter learning the results, an independent scientist conducted several test cycles and confirmed the presence of glyphosate in vaccines. He sent his data to Senator Sheehan, the FDA, the NIH, government officials, the main media.

Mom Across America has been fighting for years for the elimination of glyphosate in American mininets, considerably higher than the quantities available in our European foods, but everyone should know that the vaccines probably contain glyphosate, a toxic herbicide that is recognized by the EPA as an "effector. reproductive "that" can cause liver and kidney damage "and it is proven to be a neurotoxin. WHO considered glyphosate a probable carcinogen and for the precautionary principle our ISS should check the traces of glyphosate possibly contained in the vaccines.

We, like American friends, believe that no state or government should have the right to impose vaccines that may contain harmful additives including a likely carcinogen such as glyphosate-based herbicides, especially for our most vulnerable children. Certainly no parent would want to knowingly inject a likely carcinogen into the bloodstream of their newborn. No pregnant mother would ever want to be vaccinated with a neurotoxin and an endocrine disruptor.

The question is: how do glyphosate herbicides get into vaccines?
MIT scientist Dr. Stephanie Seneff theorized that "glyphosate could easily be present in vaccines due to the fact that some vaccine viruses (including measles in the MRR and the flu virus) are grown on gelatin derived from the ligaments of the pigs fed with heavy doses of glyphosate thanks to the GMO culture. Cattle feed is allowed to have up to 400 ppm of glyphosate residues from the EPA.

The French scientist and glyphosate expert, Seralini's research, has shown that glyphosate is never used alone. It is always used with adjuvants (co-formulants / other chemicals) and they have found these adjuvants to make Roundup 1000X more toxic. So the detection of glyphosate in vaccines with this methodology would indicate the presence of other co-formulants that are 1000 times more toxic.

Toni Bark MD MHEM LEED AP and co-producer of the film BOUGHT, says: "I am deeply concerned with injecting glyphosate, a known pesticide, directly into children. Neither Roundup nor glyphosate has been tested for safety as injectable. Injection is a very different access route from the oral route. Injected toxins, even in minuscule doses, can have profound effects on the organs and different systems of the body. In addition, the injection of a chemical together with an adjuvant or live virus can induce serious allergic reactions to that substance as vaccines cause the immune system to create antibodies against anything included in the vaccine. Given that glyphosate is heavily used in corn, soybeans, wheat, cotton and other products, we can expect to see more serious food allergies in vaccine recipients. In addition, chemicals at ultra low doses can have powerful effects on physiology by behaving almost like hormones, stimulating or suppressing physiological receptors. "